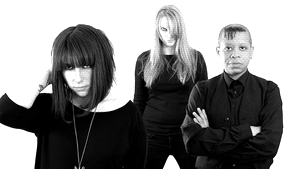 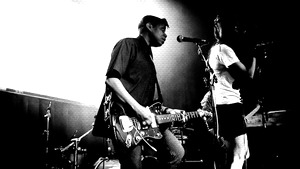 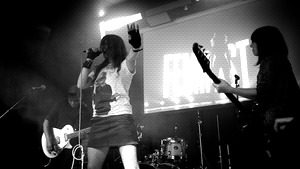 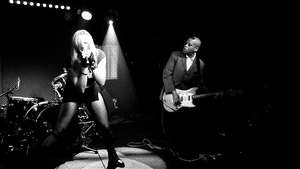 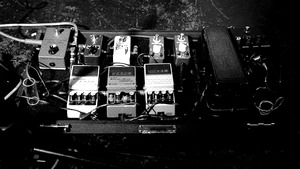 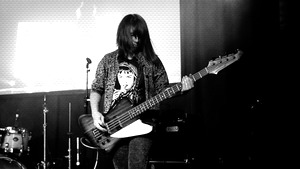 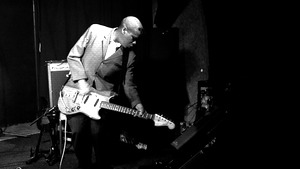 Blindness are fabulous purveyors of ‘electro-filth’, and have been ratcheting up excitement on the live scene before releasing their debut album ‘Wrapped In Plastic’ on Saint Marie Records. It’s seductive dark-wave electro-pop with incredible guitar, taking sonic tips from The Jesus and Mary Chain as well as My Bloody Valentine and with the hook sensibility of PJ Harvey. Blindness are Beth Rettig (vocals, programming, noise), Emma Quick (bass, noise), and Debbie Smith (guitar, feedback, noise) ex Curve, Echobelly, and Snowpony guitarist.

Blindness’s debut album has been greeted with excitement and acclaim - they’ve been building up a fanbase with their live shows, a highlight of the London live scene.

So how do they write their songs?

DS: It’s a secret and magical ritual. We’d have to kill you after we’d told you.

What do you write about?

BR: Whatever’s in my head. How I feel - about myself, other people, stuff that’s going on. Sometimes I wish I could be a storyteller, like Kate Bush or Nick Cave and others.

We’ve seen you live a few times, it’s always a great show. How important is it to play live and road test your songs?

DS: Very. Playing new songs live is exciting and also nerve-wracking as you never know what’s going to go over well with the audiences. Lucky for us, our audience seem to appreciate them.

BR: Playing live is important for me because I love it and I find it kind of therapeutic. It’s good to play new songs live, not just to road test them and keep the set interesting for people coming to the gigs but because it keeps things exciting (and a little nerve-wracking) for us.

How did you record the album, where and who with?

BR: This is a tricky one. The album was kind of recorded all over the place, really. It was a case of when we could do it and when we could afford to do it. Some tracks were recorded at Gun Factory with Marc Waterman, some at Zed One in Camden. Some of the drums were recorded in this weird old building (I think it was an old Olympic Committee building or something) in South London with Jim King and some parts were recorded in our living rooms. Some of the guitar parts are from the first time Deb and I got together to record in, I can’t even remember when, 2008?

Did you use any unusual techniques or instruments/sounds on the album?

BR: I don’t know about unusual. I’ve spent a lot of time with some of Debbie’s guitar parts (and occasionally my vocals) doing a lot of time-stretching, reversing etc. Just seeing what effects we can get.

DS: Not so much. Volume and general abuse of guitar strings.

What has signing with Saint Marie meant for the band to help launch and promote the album?

DS: Well, they had been interested in signing us for some time but we never got around to it what with one thing and another. Once we’d finished recording I asked Wyatt Parkin (head honcho at SMR) if he fancied putting it out - luckily he wanted to. They paid for it to be pressed and got us distribution and quite a lot of press, so it has been incredibly helpful. Thanks Wyatt!

What are your plans for the rest of the year?

DS: We’re going to play a few more gigs here and there, but we really want to get stuck into recording some new material now. It won’t be seven years before you hear it this time!

BR: Yeah, gigs and recording. I imagine some ale will be consumed between now and the end of the year.

Beth is the multi-instrumentalist whizz creating the Blindness sound - she writes songs, programs beats, records and produces. We asked what kind of sound she is after.

I don’t know that we’re aiming for a particular sound – I guess it’s just what sounds good to us at the time, what sounds right for the song and what excites us. I take a little bit from different influences in terms of sounds.

I start out with the original idea and take it to the band and we work on it from there. If things need changing or tightening up then we’ll work on it. But, if one of the others has a part that we can record I can build around that, that’s quite exciting for me – to have something to work off.

What music gear do you use?

Mics, I have an SM58 – industry standard, good for gigs, practice and quick recording - and a Rode. Good mic but not crazy expensive. That’s what I use for recording. I use software for the drums and synths. I’ve been using a lot of 3rd party VSTs synths and effects.

At the moment I’m using Cubase. I learnt to use Nuendo, but I can’t afford to buy it and I wasn’t using the full suite, so I’ve gone for the more affordable Cubase. Guitar, I use a Telecaster that Debbie gave me and I use a Cry Baby, Space-Echo and Big Muff because they make pretty noises.

Tell us about how you made the album and your part in it.

It’s really been a long time in the making. It’s been recorded here and there when we had the money and time, some of it by ourselves and some in studios. Aside from performance - writing and recording and I gave a lot of instruction for mixing. I suppose I’m quite controlling when it comes to that but, I’m not willing to just ship the parts out to be mixed and accept what comes back.

Wow. Loads of people and bands and for different reasons – performance, vocals, production, writing, sounds, personal stuff. I guess it depends on which you mean. Within music, artists like Kate Bush, The Jesus and Mary Chain, Patti Smith, Curve, Tom Wait, PJ Harvey, BRMC, NIN, Iggy Pop, to singers like Etta James and Merry Clayton. I wouldn’t have enough time to list everyone.

Debbie’s brilliant guitar-playing has been a key part of bands such as Curve, Echobelly, and Snowpony, and in Blindness she is experimenting even more with her sound. We asked what sound she is after.

Sheets of noise, with some good riffs. I like circular melodies and harmonics a lot too.

The other bands I currently play in are kind of 60s Garage Punk influenced, whereas Blindness is a bit more modern, I suppose. I can use lots more pedals with Blindness, and get more interesting sounds and noises.

(Debbie’s other bands include Ye Nuns, and The London Dirthole Company).

It’s a joy seeing you play live, do you improvise in the songs or prefer to keep it all very tight?

Improvise? It’s not bleedin’ jazz! Well, in ‘Broken’ and ‘Confessions’ there are parts which just collapse into noise, so I do change it up a bit there.

Debbie talked us through her current music gear.

At the moment my main guitar is a David Ayers custom built Jazzmaster copy/adaptation. I used to use my Fender Mustang, but I find that the Ayers affords me loads of different tones, so that’s fun.

A friend of mine, Perry Pelonero introduced me to David Ayers on Facebook, who is a luthier based in Phoenix Arizona (although I think he may have moved recently) and David said he’d like to build me a guitar for free - I accepted, naturally. We spent a while discussing what exactly I wanted - switchable single coil/humbucker pups, Jazzmaster type shape, Mastery bridge & whammy bar, 3/4 length neck, colour etc and he went ahead and made the best guitar I have ever played. It is called The Smith, and I’ve got the only one in the world.

Ayers Guitar Company, The Smith The best guitar I have ever played Read More

Debbie’s guitar collection also includes a vintage Fender Mustang which is a child’s size instrument from around 1967, a Yamaha SG1000, Gretsch Chet Atkins Nashville hollowbody, a Washburn D­-10 acoustic and her first guitar - a Vox Standard 25 strat copy. She has a Rally 6-string banjo which she uses in Ye Nuns.

As for guitar pedals, they’re multiplying!

I use a load of pedals - in fact the collection has grown since I started in Blindness. It used to be just four - overdrive, distortion, chorus & wah, but I’ve added more and bought a proper pedalboard to house them.

Currently she is using several distortion pedals including a Turbo Rat, and other pedals such as a Ditto Looper and Mooer Shim Verb.

She also has a raft of studio and recording software and hardware such as Presonus Studio One 3 Professional DAW with Vis and Melodyne plug-ins, a Presonus AudioBox iTwo audio interface, Positive Grid Bias amp modeller, Addictive Drums 2 / Addictive Keys and IK Multimedia Amplitube.

We ask Debbie who inspired her.

Emma is on a mission - ask her to describe what sound she is after, and the answer is short and sweet.

As much fuzz and distortion as I can get away with.

As the most recent member of the band how have you helped develop the Blindness sound?

The two stand out tracks for me have always been Serves Me Right and Broken as both are a little heavier and darker than the rest of the Wrapped In Plastic album. I grew up on a staple and somewhat stodgy diet of grunge, punk and metal as a kid and I guess I’ve just never really shaken that off. I’ve been a lot more involved with the newer material than the debut (which was already written and recorded before I joined the band) so have been careful to keep things faithful to the Blindness sound as best I can whilst feeling a certain level of freedom to experiment.

What do you play – what’s your key kit?

Korean Epiphone Thunderbird with Joyo AC Tone pedal (Vox AC30 simulator), my first and most loved, dinted and scratched up bass. We’ve been through hell together.

Epiphone Thunderbird Classic-IV Pro Bass My most loved, we’ve been through hell together Read More

The Smiths, Nirvana, Sonic Youth, Siouxsie and the Banshees, Yeah Yeah Yeahs (and yes, I can forgive them for not having a bass player), The Slits, The Wipers, ESG, Black Sabbath, Pixies, PJ Harvey, Nick Cave, PIL, Bowie, Joy Division, Television, The Liars, The Fall, Serge Gainsbourg.

Emma is a multi-instrumentalist and has a range of other gear from an Alesis Micron synth through to a Fender Telecaster and a Boss Digital Recorder.